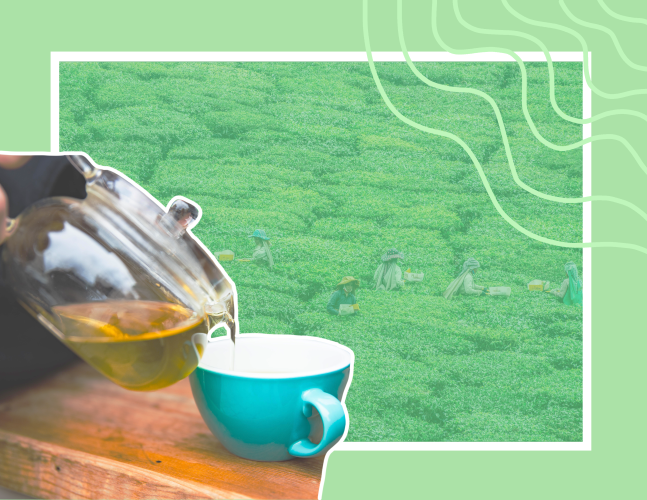 Typically, if you are not a coffee drinker, the chances are that tea might be your go-to. In our previous post, we discussed the problems in the production of the third most consumed beverage in the world: coffee. Now, we will discuss the problems in the production of the second most widely consumed beverage in the world (only after water): tea. This ranking is no shock as we look across all cultures and find tea is at the center of many. It is also believed that tea has even increased in popularity since the beginning of the coronavirus pandemic in 2019 due to the health benefits certain teas claim to hold. As a result, the tea market is still growing with ready-to-drink teas in the lead (in contrast to the traditional market or the specialty and foodservice segments). But like most products that are in high demand, the tea industry contributes its own negative impacts to labor abuse and on the environment.

Similar to coffee production, large areas of forests are cleared to make way for tea plants to grow (all tea is derived from Camellia sinensis plants, except ‘herbal teas’ that are technically not tea and is merely the phrase we use). This deforestation then leads to soil erosion, disruption of water flow, and a decrease in biodiversity in those areas. Without biodiversity, ecosystems cannot function properly, and humans cannot reap the benefits that these systems provide. The expansion of tea plantations has led to the endangerment of many species, such as the lion-tailed macaques in India (the second leading tea producer in the world). In China (the leading tea-producing country), substantial evidence has been gathered that shows its biodiversity on the decline all the while their tea plantations continue to increase.

If you have ever wondered what your single-use tea bags are made of, it is most likely nylon and polypropylene plastic, which is used to seal the bag together. Polypropylene is recyclable (though only 1-3% is actually recycled) and generally safer than other plastics. However, single-use plastic should still be avoided if possible. In addition to microplastics and bleach residue being released into the drink, contrary to popular belief, “polypropylene takes about 20-30 years to degrade and will release toxins in the process, so it can’t be described as biodegradable” according to most definitions. This is a more rapid degradation process than other plastics that could take hundreds of years, but by no means does that cross it off as environmentally friendly. So, if your package of single-use tea bags are labeled as ‘biodegradable,’ as multiple brands are, it is probably using a definition loophole. Nylon is another non-biodegradable plastic too that requires harsh chemicals during its manufacturing.

Furthermore, ready-to-drink teas, such as Snapple, also have their drawbacks. While Snapple once sold their fruity teas in clear glass bottles, the company switched to plastic in 2018. Although the company claims the new bottles are recyclable, glass is arguably the better option for recycling, as the life cycle is longer compared to plastic. Over time, recycled plastic loses its quality and eventually becomes unusable. Another pro to add to the list for glass is that it is easily reusable even without having to go through a recycling process.

Also similar to chocolate and coffee production, the tea industry contains its own labor issues. A transparency tracker found that thirteen million workers in the industry are deprived of their rights, ranging from gender-based violence to forced labor. These issues stem from colonial times, such as in India with the British East India Company that was established in 1600. Many Adivasi (a collective name for Indigenous Tribes of Indian) are trapped in a cycle of poverty as a consequence of the establishment of tea plantations in the state of Assam. In Kerala, another major tea-producing Indian state, women are paid lower wages compared to their male counterparts. Even though female workers can engage in more intensive work, they still earn lower wages.

Perhaps one of the major causes of the industry’s labor abuse is not just its lack of environmental sustainability, but its lack of economic sustainability. Despite being such a popular beverage around the globe and having used labor ‘shortcuts,’ it was found that prices of tea have not moved since the 1950s, when taking inflation into account, causing producers themselves to make insufficient money to live on once the final product leaves the shelf. The reality of this is visible in the villages that rely on tea production and hope for their big name retailers to take action in their prices.

How We Can Help Clean It Up

The best sustainable option to enjoy a nice cup of tea: prepare it loose-leaf. Not only is there less chemical leakage into the beverage, it is even cheaper after the initial infuser is purchased, as you are not paying for the bag as well as the tea with each cup. Loose-leaf tea also tastes better, due to the freshness of its leaves. Mainly, though, this method ensures a minimal negative impact on the environment. All around, loose-leaf tea is better than its single-use competitors, as it amounts to less waste. Tea infusers and strainers can be purchased to keep the leaves from mixing with the drink, and some mugs even come with their own strainer. While loose leaf infusers are made out of a multitude of different materials and can be shaped into various fun forms (from animals to submarines and other numerous options to choose from), they are designed to be reusable and serve its purpose for many years to follow. The one time manufacturing process of these infusers does ultimately lend to counteracting the footprint that would alternately accumulate if tea bags or tea pods, like K-Cups, were the regularly chosen option.

A great deal of companies further work to minimize their footprint by not only making their steeping methods more sustainable, but by guaranteeing more environmentally friendly packaging too. For example, Arbor Teas is an organic tea company that sells its loose-leaf tea in compostable packages. Plus, their organic farming practices are better for the environment in helping to uphold biodiversity. In addition to its sustainable actions, the company is Fairtrade Certified (as discussed in more detail in our coffee production post).

If loose-leaf tea is not a viable option for you, another company to checkout is Juniper Ridge. While not selling loose-leaf tea is a drawback, their leaves are sustainably harvested from California. The box that contains the bags is certified by the Sustainable Forest Initiative, which means that the packaging is accredited to being sustainably sourced in a way to conserve nature. Additionally, the company founded the Western Wilderness Defense Program under which they donate 10% of their profits from tea sales (over $250,000 so far) to various conservation organizations and projects.

Thus, while the tea industry has its issues that must be fixed, many companies are striving to be both earth and human-friendly. On our part, the best we can do is to help raise awareness of harmful production practices and check those and the sourcing of the companies we decide to purchase from. When given the availability, switching our steeping methods from single-use to reusable with loose-leaf tea would also help to nudge us in that right direction.

So, whether you are a coffee connoisseur or a tea aficionado, always remember to shop sustainably!