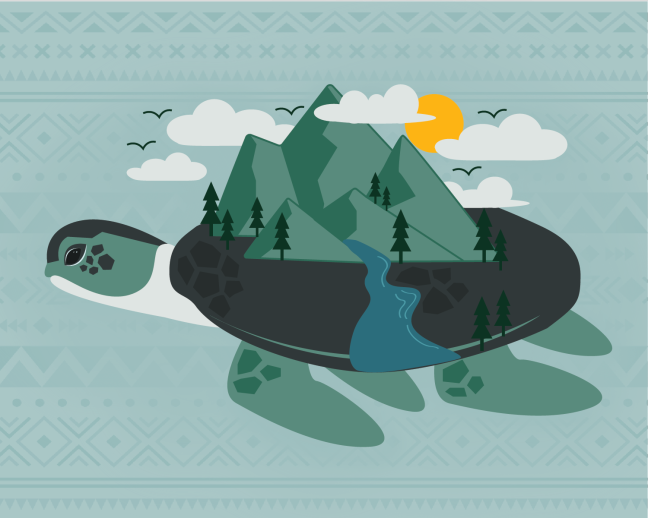 Some Indigenous peoples believe their land was formed on the back of a turtle. For this reason, “Turtle Island” is the name used for lands of North and Central America.

Indigenous Peoples’ Day, which falls on the second Monday of October each year, celebrates and commemorates the culture and practices of the Native American people.This year, Indigenous Peoples’ Day was officially declared a federal holiday. . It was not always a federal holiday, though. It was first rooted by the United Nations in 1977, but South Dakota was the first state in the country to recognize it in 1989. It was institutionalized in Berkeley, California in 1992 to protest Columbus Day, which takes place on the same day and had been declared a federal holiday itself in 1937. The declaration of Indigenous Peoples’ Day came after years of protest and discussion by the International Conference on Discrimination Against Indigenous Populations in the Americas’ about replacing Columbus Day. On account of Columbus’ ruthless genocide of the Native peoples already inhabiting the Americas upon his ‘discovery’ of the New World in 1492. Local and state governments can make the decision whether to observe federal holidays, and, as years passed, more and more cities and states chose to celebrate Indigenous Peoples’ Day in conjunction with or rather than Columbus Day. In light of the new federal proclamation, many states, including Texas (in conjunction), and more than 130 cities celebrate the Indigenous history of America.

After being declared a national holiday by President Joe Biden on October 8th, Indigenous Peoples’ Day was celebrated as a federal holiday for the first time on October 11th, 2021. A Proclamation on Indigenous Peoples’ Day, 2021, President Biden’s statement that the nation “celebrates the invaluable contributions and resilience of Indigenous peoples, recognizes their inherent sovereignty, and commits to honoring the Federal Government’s trust and treaty obligations to Tribal Nations,” hopes to recognize the damage dealt to Indigenous peoples from colonization and throughout the history of America, as well as to pay tribute to their remaining people and still-vibrant culture.

The Traditional Caretakers of the Land

On Thursday, October 21, 2021 the campus Environmental Justice Collective hosted a discussion called “The Traditional Caretakers of the Land” in honor of this year’s Indigenous Peoples’ Day. At this event, they spoke about Indigenous peoples’ perception of land and how Western practices contrast with it. Recently, this has been evident with the Standing Rock Protests and opposition to the Keystone XL Pipeline Project. The Standing Rock Protests began seeing national news coverage in 2016, as Energy Transfer Partners moved to complete construction of the Dakota Access oil pipeline under the watchful eyes of the Standing Rock Sioux Tribe and multiple other groups trying to block the construction. Thousands of people camped around the pipeline, and over 570 were arrested with many more injured. A similar issue, the Keystone XL Pipeline Project (KXL), has been on a more “stop-start” timeline. After its initial proposal in 2008, the project steered its way through over a decade worth of civil protests and changes of legislation; largely driven by the switching hands of the United States presidency. For example, Former President Barack Obama in 2015 had rejected the necessary permit to continue construction, but the following president, Donald Trump, revived it. Fortunately, President Biden kept his word from a campaign promise to revoke the permit that so many environmentalists and Indigenous groups sought to eradicate.

The Environmental Justice Collective’s event also presented the values held in different Indigenous cultures. One value is considering seven generations ahead before acting. As more resources become depleted, this is something that should become a value to all. Another is to take only what is needed and to share the surplus. In a culture of overconsumption, this value is the most striking. Although people are starting to become more mindful of their consumption and the impact it has on the earth, it must be acknowledged that this has long been a value in Indigenous communities. Of course this means it must also be acknowledged that the people who had their land forcibly taken from them were the first ones concerned about conserving the earth. This is why it is crucial to include Indigenous peoples and their values in environmental spaces.

The event finished with discussing how to be allies to Indigenous people. Native Land Digital allows you to see whose land you are on, so that you can learn the history of the land on which you reside. You can help by supporting communities directly through donations too. Organizations you can donate to include the Indigenous Environmental Network, National Indigenous Women’s Resource Center, and the American Indian College Fund.

Does Indigenous Peoples’ Day Do Enough?

Does the declaration of Indigenous Peoples’ Day as a federal holiday make up for hundreds of years of genocide committed against Native Americans? Indigenous people in America have been pushed out of their ancestral lands, and countless tribes have been completely wiped out in the strife that has existed ever since Columbus landed in the Americas. Many feel that simply declaring a holiday commemorating the cultures that the United States has attempted to systematically wipe out is far from enough to truly do justice to Indigenous Peoples. When not accompanied by any actions to actively make reparations to the Native Americans, the gesture of Indigenous Peoples’ Day rings hollow. Some efforts have been made in this direction, such as pushing for the education of Indigenous history in classrooms and including Indigenous voices in more discussions of land use, albeit even these efforts have their obstacles in our current society.